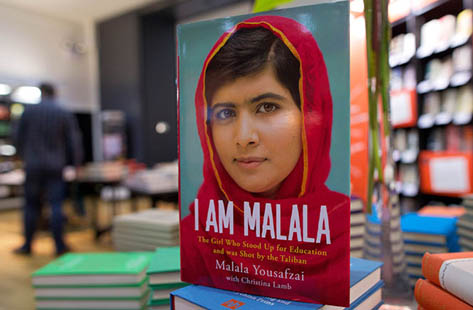 Copies of an autobiography by Pakistani schoolgirl Malala Yousafzai, entitled 'I am Malala' are pictured in a book store in London, on October 8, 2013. Co-written with British journalist Christina Lamb, "I Am Malala: The Girl Who Stood Up for Education and was Shot by the Taliban" tells of the 16-year-old's terror as two gunmen boarded her schoolbus on October 9, 2012 and shot her in the head. AFP PHOTO / ANDREW COWIE

I Am Malala – Pakistani youth activist Malala Yousafzai, 17, was awarded the 2014 Nobel Peace Prize on Friday, October 10. She is the youngest Nobel winner in history. Malala shares the prize with Kailash Satyarthi, a 60-year-old man from India who has helped lead a movement to end child slavery around the world. Both winners were recognized “for their struggle against the suppression of children and young people and for the right of all children to education,” the Norwegian Nobel Committee announced on Friday.

Malala Yousafzai has never been ordinary. When she was just 11 years old, she started blogging about the Taliban takeover of her hometown of Mingora, in northwestern Pakistan. Taliban members follow an extreme version of Islam, and believe young girls like Malala should not go to school. Classrooms throughout the Swat district of Pakistan, where Malala was living, were closed for several months. Malala spoke publicly about her desire to go back to school. “All I want is an education,” she told one television broadcaster.

When the Pakistani government regained control, Malala was able to return to class. She continued to blog and speak out about girls’ right to education. But on October 9, 2012, the Taliban tried to silence her. A gunman boarded her school bus and shot her on the left side of her forehead. Malala survived, and showed great courage and optimism during her long recovery. During this time, she became a symbol of the struggle for girls’ rights all over the world.

Now, Malala has also become an international symbol for peace. Each year, the Nobel prizes honor excellence in medicine, literature, chemistry, promoting peace, and other fields. It is one of the highest honors in the world. Malala and Satyarthi will split the award of $1.1 million.

The importance of education cannot be over-emphasized, it has really helped Malala to achieve success today and to remain as a mentor to the upcoming generations. This importance of education is basically for two reasons. The first is that the training of the human mind is not complete without education. Education makes one a right thinker. It tells one how to think and how to make decision.

The second reason for the importance of education is that only through the attainment of education, man/women is enabled to receive information from the external world; to acquaint someone with past history and receive all necessary information regarding the present. Without education, man is as though in a closed room and with education he finds himself in a room with all its windows open towards the outside world.

Youth is that phase of life when you dream big, hope for only the best to happen to you and look forward to a bright tomorrow. It is that phase when nothing seems impossible; you want to be successful and you believe you will. You feel you know exactly what you want from life and you believe you will get it. During these years, life looks bright and beautiful. You feel you can win the world. It’s an important phase in your life – youth – when you turn into someone different. It’s the time to reinvent yourself and redesign your personality. And that’s where education has a big role to play.

Gives them Wings: The importance of education manifests itself in the need to cultivate youths to become mature individuals. Youth is the growing stage of their lives. It is during these years that they develop from kids to become mature and responsible individuals. It is during this phase that they make career decisions and begin pursuing their goals.

Tells them Where to Fly: Education should consist of training and development in their field(s) of interest. It should help the youths define their career objectives, decide what they want from life and enable them to achieve what they wish to. Education to youths must aim at helping them build a skill set and work on the skills acquired to develop subject expertise.