British Sikh Ravi Singh regularly risks his life to give aid and supplies to people in need in some of the most dangerous parts of the world. Some may ask- why would someone risk their life to help people they don’t even know? The answer to that is selfless service, a practice in the Sikh faith known as seva. Sikh temples, or Gurdwaras, serve free vegetarian meals to everyone regardless of race, religion or social status. Ravi Singh has dedicated his life to follow the teachings of the founder of Sikhism, Guru Nanak, and do seva where it’s needed the most.

17 years ago, Ravi decided to revisit his Sikh faith in the mid-90’s after he discovered that his childhood friend was killed through torture in 1989. As a result of his new connection with Sikhism, he started Khalsa Aid. Now, him and his Khalsa Aid team leave their families behind every few weeks to put themselves on the front line and travel to various parts of the world where their help is needed the most.

“That although these journeys are dangerous, it’s worth the sacrifice. It’s the calling from within” -Ravi Singh

In a recent documentary named “The Selfless Sikh- Faith on the Frontline” BBC followed Ravi Singh to an area in Northern Iraq near Mosul, one of the most dangerous cities in the world. Ravi has been making regular trips to deliver essential supplies to the families remaining in this perilous area. The Khalsa Aid team, with the help of organizations in the area, not only deliver food packages, but also bring these surviving families some much needed hope with every trip that they make.

The Selfless Sikh Faith on the Frontline Khalsa Aid Documentary

Documentary following Ravi Singh, a Sikh charity worker who, inspired by his religious principles, puts his life on the line to help people in need. The programme follows Ravi’s journey to northern Iraq, where he provides aid to Yazidi families who have fled their homes to escape the brutality of Islamic State. The film reveals the teachings of selfless service at the heart of his Sikh faith.

Although Ravi is now well known in the camps he delivers aid to, his distinctive appearance as a Sikh makes him a potential target outside of the towns. In the documentary, he explains that him and the other turban- wearing Sikhs choose to wear different coloured turbans rather than black and white while in this territory, for fear of being misunderstood as the enemy.

Ravi says that he is extremely proud of his community for continuously and unconditionally supporting him and Khalsa Aid. “That strength comes from my faith, when we say recognize the whole human race as one. There’s also that concept of ‘sarbat da bhala’, which means well being of all, and we have put that into practice.” Khalsa aid not only bring help to those in official displacement camps, but also those which are unofficial. As shown in the documentary, some unofficial camps or villages are located inside half-built buildings. 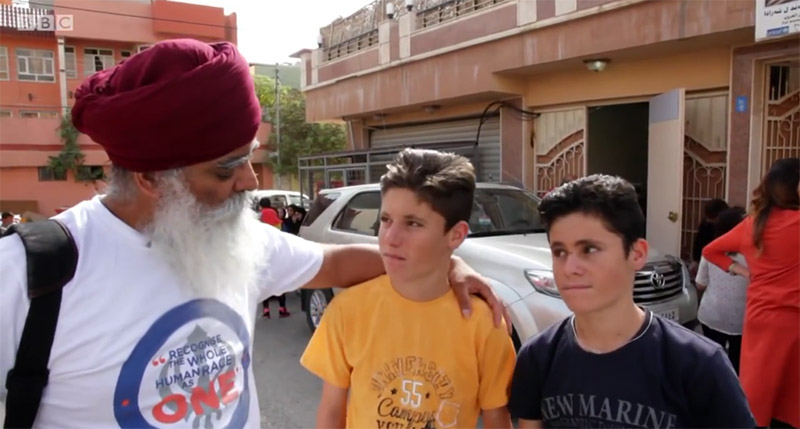 Recognize the whole human race as one -Khalsa Aid

Besides the delivery of supplies, time is taken out to visit those who have been recently freed from captivity. They are taken to the city to buy some new clothes. Ravi says this is simply a gesture to help them break their routines, put smiles on their faces and remind these women and boys that there is someone who cares about them.

Ravi Singh is a prime example of the fact that one person can make a difference. One kind gesture can be the difference between life and death and kindness can go a very long way.