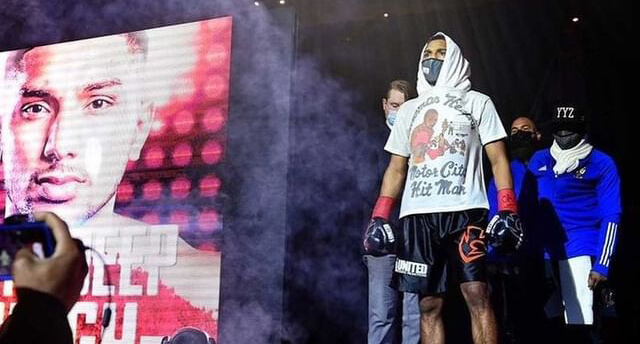 Punjab born professional boxer Sukhdeep ‘Chakria’ Singh from Ontario, Canada will be fighting for the Canadian Welterweight title against Richard ‘The Frog” Holmes in Brampton at the CAA Centre on February 26, 2022.

This fight will be Sukhdeep ‘Chakria’ Singh’s second time boxing Richard Holmes at the CAA Centre in Brampton, Canada.  Their first fight was on 2020 02 22, where Sukdheep Singh won by unanimous decision.

Sukhdeep ‘Chakria’ Singh is born in the village of Chakar in the state of Punjab, India.  After winning every match in the Super Boxing League (SBL), Sukhdeep was titled, “Best Boxer of the League”.

In one of Sukhdeep’s interviews, Sukhdeep reminds his opposition that he first won the State Championship, followed by a Silver and a Gold in second year at National Championships.

Sukhdeep has also won a Gold in Super Cup Boxing Tournament and has trained internationally in Ireland and China, as well as with the Indian Olympic team.

Since beginning his amateur career in 2011, Sukhdeep has championed every level of competition from district to national, and transitioned to a professional boxer in 2017, and he continues to gain momentum.

The art and my will to fight is drawn from a rich Sikh lineage of warriors, generals and martyrs that lead our people through what otherwise would have meant extinction. – Sukhdeep Singh Chakria

Sikhpa reports, while speaking with the Sikh Press Association, Sukhdeep says “I am honoured to be one of the new generation of Punjabi Sikh athletes.

“Our community is known to produce talent in many sports – such as hockey, cricket and wrestling – but not in boxing. To have the chance to be among the first to make a real mark as a Sikh boxer is a great challenge but my faith in Sikhi will help me achieve as long as I continue working hard.

“The Sikh community has always had talent, especially in combat. Now we can prove it because we have the programmes that put those with talent into competition.”

Sukhdeep ‘Chakria’ Singh VS Richard ‘The Frog’ Holmes on February 26 at CAA Centre in Brampton, Canada